“The London Blitz started quietly. Less than 100 incidents reported by the London Fire Brigade up to 5pm on September 7, 1940. Only a few weeks after the British victory in the Battle of Britain, what came then must have been a terrible shock for Londoners. [You can read the original Guardian archive report of the night here.] At 5.30pm, some 348 German bombers escorted by 617 fighters pounded London until 6.00pm. Guided by the flames, a second group attacked with more incendiary bombs two hours later, lasting into the next day.” The Guardian 6 Sept 2010

On that first day of the London Blitz, 6.12 pm 7th September 1940, an incendiary bomb landed in the street in Mornington Grove.  In the course of the Air Raids that continued until June 1941, many bombs fell in the vicinity of Bow Road station and the District Line railway.

This photograph from the London Transport Museum Collection (ref: 1998/35156) is taken from the site of the footbridge across the railway from Eleanor Street to Arnold Road, looking towards Mornington Grove.  It was taken by Topical Press on 21 October 1940.  Top left-hand corner, visible beyond the destroyed railway wall, is Eleanor Street at its junction with Mornington Grove, No. 9 Mornington Grove visible in the background at the top left.  Nos. 7 & 8 that should be to the right are by this time nothing but rubble, having been previously made dangerous by bomb damage. Nos. 5 & 6 were also totally destroyed. The distinctive chimneys of Bow Road station can be seen in the background beyond the bridge; the rear of Nos. 48 – 56 Bow Road a shadowy presence on the right. 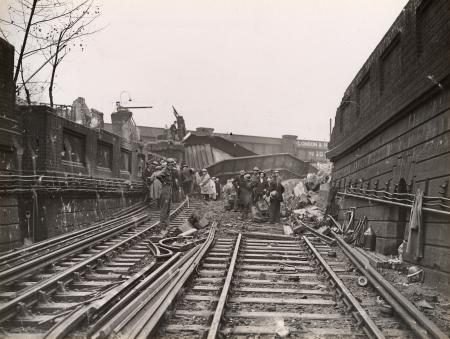 Looking in the other direction it can be seen that the footbridge has collapsed, irreparably damaged, but the London and North Eastern Railway (previously London and Blackwall; later Great Eastern Railway) bridges over the District Line appear unscathed. (London Transport Museum Collection, Topical Press, ref: 1998/35154).

Mornington Grove was owned by Ratcliff and Barking Monthly Meeting, which was the regional administrative meeting of the Religious Society of Friends, Quakers.  A member of the committee charged with managing the “Bow Road Estate”, summarised the position on 16 June 1943 when presenting the accounts for the year ended 31 December 1942:

“Certain changes in Rentals have taken place arising out of the Air Raid Damage to the Properties, sustained in October 1940.

No.s. 26-27-28: Mornington Grove & No. 5(?) Bow Road. Premises were our own Buildings, and let on Weekly Rentals bringing in an approx. Net Annual Rental of £100.  These premises were rendered uninhabitable by the Air Raid, and the Income thereon temporarily lost.  War Damage Claims have been rendered in respect of these premises.

No. 29 Mornington Grove was damaged in the Air Raid, but Reinstatement work to the value of £132 has been carried out, and the cost recovered from the W.D. Commission.  In consequence we have secured Tenants on agreement for 3 Years from 25.3.1942 at a Rental of £50 per annum, exclusive of all Rates, Maintenance, and other outgoings.  This Rental is an Increase of £10 per annum on the pre-war Rental.

The Remaining Rentals are Ground Rents and Nos. 7 and 8 Mornington Grove have been disclaimed as the site has had to be cleared owing to danger from the damaged buildings.

The Lessees of Nos. 17, 44 and 45 Mornington Grove vacated their damaged buildings and at present cannot be traced, so that arrears of Ground Rents of £12 per annum are now outstanding for over 2 Years but have not been brought into account owing to the present uncertain prospects of recovery.

Nos. 21-22-23-24-25 and 47 Mornington Grove, all under one Lease have been offered to us for surrender. Against the amount of £100 asked as compensation, we have had our offer of £60 accepted, and the details of this matter will be brought before you for a minute of approval at a later date when the legal details have been adjusted.

So, in addition to the loss of Nos. 1 – 6 of the fine houses that originally graced the west side of Mornington Grove, 7 & 8 have now gone courtesy of the Luftwaffe Air Raids on London. And many of the tenants have scarpered or been obliged to leave due to bomb damage.

This map uses information from the London County Council Bomb Damage Maps, 1939-45, compiled by Laurence Ward (Thames & Hudson 2015), coloured-in on a 1914 OS map. (only Mornington Grove, and the east side of Wellington Way and the near part of Arnold Road have been coloured in – there was extensive damage throughout the area)

The map shows that hardly any buildings in Mornington Grove escaped unscathed.